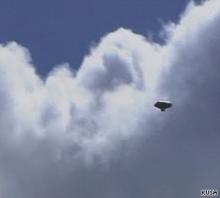 Earlier this morning, a 6 year old boy lifted off in Fort Collins, Colorado in a homemade balloon constructed to look like a flying saucer. The boy's father and he had been working on it for months, constructing the large 20 x 5 ft helium balloon from mylar and thin plywood.

The balloon had been anchored to their home with a long rope and this morning his older brother watched him climb inside and take off. Shortly thereafter, the flying saucer shaped silver balloon was witnessed by local citizens, rising several thousands of feet in the air over eastern Colorado.

Officials followed in a helicopter, attempting rescue- but, a few minutes ago, the balloon landed and the boy was no longer inside. The world is watching with baited breath to learn whether or not the youngster is still alive. The door to the small compartment under the balloon was unlocked so it is possible he has fallen out. We can only pray that this little rebel is alright and that he is found somewhere safe and uninjured.

A known storm chaser, the boy's father Richard Heene appeared on the television program WifeSwap, where he and his wife, Mayumi, focused on their love of extreme weather and science.

In this case, little Heene took his father's curiosity and love for danger in the skies a little too far. Hopefully, he will be found alive in the next few hours. Stay tuned! 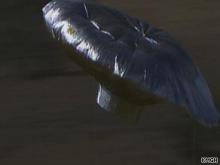