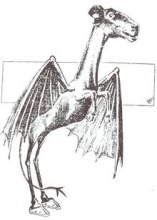 Somebody recently told me that the Jersey Devil legend had been debunked, so I went and looked it up for myself and found out it's not quite so simple. The article in question is on a website called Skeptoid, which tells you what the author's bias is right off the bat. To his credit, though, he avoids the most common fallacy of professional debunkers- assuming that if you can come up with some vaguely possible non-supernatural explanation of what might have happened, you have effectively disproved the entire legend.

What he did was to go back to the original sources and establish two things:

1- Some of the 19th century Jersey Devil legends were fabricated in order to discredit a local politician. Of course, an existing local legend could well have been hijacked for such a purpose, so this doesn't really debunk the Jersey Devil as such. However, it does prove that the commonly-given “origin story” for the creature could not have happened.

2- in 1909, when many of the famous sightings occurred, some prankster attached fake wings to a kangaroo and charged admission to see the Jersey Devil. However, as the author admits himself, there is no clear indication whether this happened before or after the sightings, so it could have just been a case of someone trying to cash in on the public interest in the creature after legitimate sightings had occurred.

He ends up concluding, quite sensibly, that any number of things could potentially explain the sightings and that we don't know what really happened, but that there is “no compelling reason” to assume there's a Jersey Devil out there in the Pine Barrens. I can't really say I have any problem with that conclusion, but it falls rather short of a debunking. It comes down to a difference of temperament. When confronted with such a legend, his inclination is to disbelieve without definitive proof. Others are inclined to believe whether they have proof or not. My inclination is to say “maybe” and to enjoy the legend!


Warren Buffett: Tool of the Illuminati?