"Mermaids, The Body Found" As Entertaining As It Is Ridiculous (And Fake)

"Mermaids, The Body Found" As Entertaining As It Is Ridiculous (And Fake)

One thing the show got right: All scientists are hotties. 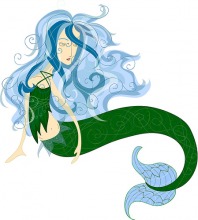 Let's just get this out of the way up front: there are no mermaids. It was all fake. Which you wouldn't necessarily know unless you stuck it out to the very end, when they showed a pair of gray-on-black paragraphs to the effect that "We pretty much made it all up."
Until that fleeting moment, the two hour special ostensibly about the discovery of mermaids plays it completely straight. One might be tipped off, of course, by the bad special effects, the fact that it's about mermaids, the dubious acting skills, or the way that everyone on the show had a Canadian accent.
(One thing the show got right, though: All scientists are hotties.)
If you know up front that you're watching a mocumentary, "Mermaids" is a pretty entertaining ride. From what I saw on Twitter as the show aired, a lot of people were pretty irate when they finally realized that it was all fake. But one thing is for sure: these weren't your pretty, sexy mermaids: these things are scary, alien-looking creatures with gray skin and eyes that are far too big, and blink wrong.
The show has two basic plot lines. In the first, we see interviews with present-day NOAA scientists who apparently discovered mermaid remains. In the second, we are treated to a CGI mockumentary-within-a-mockumentary about the mermaids: how they split off from humanity six million years ago and took to the seas. We see mermaids hunting with dolphins, giving birth (the camera cuts away at all the interesting bits), and even performing the ultimate sacrifice to save the pod from a megalodon.
This self-sacrifice scene was genuinely touching. It's a bad sign when your CGI mermaids are better actors than the live-action humans.
I was distracted during the CGI bits by the fact that I recognized most of the footage the CGI had been laid over. If you have seen every episode of "Blue Planet" and "Planet Earth," then you will probably recognize it, too.
Overall, the show is ridiculous (if fun). But it features two things that are real, and I worry that this show has done them a disservice. That the general viewing public, realizing that the show is fake, will toss the baby out with the bath water, so to speak.
The first of those is the Bloop. Which, okay, whatever, it's just a weird noise, no big deal.
The second is the Navy's sonar testing. The Navy really has developed a super sonar, and they really are setting it off in our oceans, and it really is (probably) damaging and even killing real-world animals like whales and dolphins.
Stay tuned tomorrow for more about the Navy's sonar testing!
< Previous post:


Problems With The Aquatic Ape Hypothesis