Warren Buffett: Tool of the Illuminati?

Warren Buffett: Tool of the Illuminati?

As a rich white dude, naturally many people believe that Buffett is a tool of the Illuminati, and/or the Rothschilds. 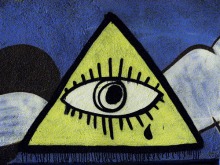 Last week when I was thinking about the conspiracy theories that surround the success of hip hop and rap artists like Jay-Z and Tupac, I found myself thinking "I bet it's just people being racist because they don't think a black person could be successful in a musical genre that they hate. I bet there aren't any conspiracy theories about white guys like Warren Buffett!"
And then I did a quick bit of Googling which immediately rendered my theory invalid. In fact, quite a few people are supporting conspiracy theories about Warren Buffett. And interestingly, these two beliefs - about Jay-Z and Warren Buffett - intersect at several points.
As a rich white dude, naturally many people believe that Buffett is a tool of the Illuminati, and/or the Rothschilds. Jay-Z, of course, has achieved a kind of notoriety by seemingly overtly signaling that he is a member of the Illuminati. He throws a hand sign which is said to represent the Illuminati's all-seeing pyramid.
When Buffett visited Jay-Z's club earlier this year, Buffett was photographed throwing the same sign. Naturally, conspiracy theory circles went nuts over these pictures! And in truth, it is a little bit weird to wonder why a little old white man would want to visit Jay-Z's 40/40 club. But hey, if you have as much money as Warren Buffett, you can do pretty much whatever you want on a Friday night. So why not?
(I have already covered the Illuminati-related conspiracy theories regarding Jay-Z in an article here.)
Those who believe in a Jewish international banking conspiracy also suspect Buffett of being a pet of the Rothschilds. The Rothschilds, of course, are one of the world's largest and oldest conspiracy theories. This is a family which is both Jewish and surpassingly rich, so that's an obvious target. For all practical purposes, the Rothschilds ARE the "Jewish international banking conspiracy," or are at least a very big part of the source of those corrosive beliefs.
I am often more fascinated by WHY people believe conspiracies than I am by the conspiracies themselves. My current theory is that a certain kind of person (typically someone who feels unsuccessful in their own life) finds it easier to believe that other people are successful because of a grand conspiracy. In other words, it's not that I'm a broke loser, it's that I haven't allowed myself to become a pawn of the Illuminati!
Yeah, that's the ticket!
< Previous post: