Yesterday entirely by accident I ran across a Wikipedia article about what essentially amounts to a military-grade dowsing rod.  (Seriously, what would we ever do without Wikipedia?)  This gadget, the ADE 651, is marketed to countries in the Middle East as bomb and drug detection devices.  And it has done a brisk business, too!  Iraq for example has spent approximately $85 million on them.

The ADE 651 is manufactured by a British company, which was recently shut down by the British government, pending a massive fraud investigation.  Are you surprised?  (I'm only surprised that the government actually took action, considering some of the crackpot things I have seen for sale.)

The ADE 651 follows standard dowsing rod form and behavior.  Wikipedia describes it as being "a swiveling antenna mounted via hinge to a plastic handgrip."  The ADE 651 detects a number of different substances, from truffles to contraband ivory. 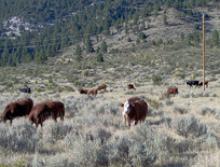 In the middle of nowhere, about a hundred miles east of Salt Lake City, lies a parcel of property with a long history of strange and terrifying occurrences.  The property is called Skinwalker Ranch, after the legends of the local Ute tribe, which holds that the property is the stomping grounds of the skinwalker.

The skinwalker is a Native American shapeshifting deity, attributed largely to the Navajo people.  The skinwalker is a malicious witch or warlock who can change shape by wrapping the skin of an animal around themselves.  Much like the werewolf of Western myth, the skinwalker's primary hobby is terrifying and attacking others.

Skinwalkers may attack passing cars, or fling themselves at the doors and windows of a house in a furious attempt to get at the people inside.  The skinwalker can also emulate the call of any animal or person, and uses this power to lure people outdoors at night so that the skinwalker can attack them. 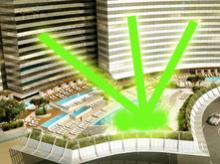 The Vdara, Las Vegas' newest and most prestigious - and also most empty and under-sold - building project has a little problem.  Just a teensy one.  Of SCORCHING DEATH.

You see, the glass in the window of the building's attractive curve happens to form a parabolic mirror.  You may remember the power of the parabolic mirror from a "fan participation" episode of Mythbusters, where fans of the show built their own Greek weaponry.

The parabolic mirror is thought by some to be a weapon wielded by the ancient Greeks against seafaring enemies.  The Mythbusters dubbed it the "Archimedes Death Ray."  (N.B. at the end of the episode, they declared this myth "Busted.")

Investigators like the Ghost Hunter teams use a lot of expensive, specialized equipment in their investigations.  But you can hunt ghosts on your own without blowing the budget!

Bells are an inexpensive method of detecting the presence of a ghost.  The use of bells as an interface with the spirit world goes back hundreds of years.

"Bell, book, and candle" is a phrase that has been in use since medieval times to indicate travel to the spirit world, banishing a spirit to Hell, or calling a spirit forth from the darkness.

What if “Go Put Your Records On” had a whole new meaning? What if instead of just playing music, it meant hanging out with your dead grandparents?

That’s the idea behind the UK company And Vinyly’s latest product. People can leave their ashes behind to be pressed into a vinyl record, with a complete recording of their voice, will, or favorite song.

Yeah, it’s weird. And with a slogan like “From beyond the groove,” you know they’re really into their product.