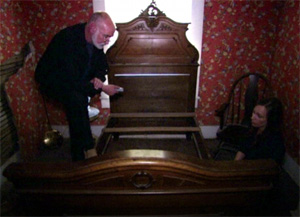 I have watched a few episodes of the Syfy Channel's new show, Haunted Collector. And I have to admit, although I really want to like this show, I remain unimpressed and skeptical.

I remember the boys in my junior high school telling me about all the hidden messages in Disney movies.  They said there were hidden propositions underneath characters’ voices, obscene drawings in the architecture, and nudity in the background.  I never believed them because adolescent boys see sex in the patterns of chicken nuggets on their cafeteria trays.

Why things like the Vancouver Riots happen, and why they're likely to continue to happen.

How to start a fire:

Riots are nothing new, and often we hear about them happening in far away places and there's a sort of subconscious shrug as we dismiss it as "the way those people are". The Vancouver Riots last night are different for a few reasons, not the least of which is that they took place in Vancouver. Canada. It's not often that we see the social fabric pulled back from our northern neighbors. The country campaigns on its friendliness and courtesy, even highlighting those qualities in the 2008 Olympics (also in Vancouver). Of course, with a slightly longer memory we may recall the 1994 riots, again over the loss of their precious Canucks hockey team and again during the Stanley Cup finals.

Does the name Titanic mean your boat will sink?

The Titanic sunk again last week.  The Titanic II, that is.  Mark Wilkinson, a 44-year-old Brit, seemed like he was asking for trouble when he named his 16-foot cabin cruiser Titanic II.  Like its famous predecessor, the Titanic II was on her maiden voyage, but unlikely her costly “sister,” only cost $1,640 secondhand.  Wilkinson took the boat out fishing without event, but as he re-entered the harbor, he found that a hole had formed in the ship’s hull.  Wilkinson was saved by the coast guard, but his ship was doomed.  He was asked many times if he hit an iceberg.

Naming the boat Titanic II seemed to foreshadow its destruction, but Wilkinson’s naval misfortune was not the first disaster that might have been thwarted with a simple change of name. If you believe that kind of thing.  The first disaster was allegedly predicted in an 1898 book called Futility written by a man named Morgan Robertson.  The ship in Robertson’s book was called the Titan, but there is a creepy similarity between the two doomed ocean liners.

Here’s a comparison between the Titan and the Titanic:

But is it the naming of a ship Titan/Titanic really what causes it to sink?  Any logical person would say no.  In fact, pre-Titanic disaster, naming your ship after a race of Greek gods would inspire nothing but trust in the vessel’s voyage across the sea.  But now that there’s a history, is naming a ship Titanic really worth the risk?  Does it disrespect those who died on the tragedy?  Is the name really cursed?

I guess we will find out all of the answers to those questions next year on the hundredth anniversary of the Titanic disaster, April 10, 2012. The Titanic Memorial Cruise will set sail  from New York on the 100thyear to the day the Titanic left from Southampton.  The ship isn’t being named Titanic, however; it is called, tamely, Journey and is part of the Azamara fleet.

However, much of the voyage’s itinerary focuses on lectures centered on the Titanic disaster. Cruisers will hear tales of the life on the ship as they near the ship’s resting place, there will be a memorial service for the dead at 2:20am on the 100thanniversary night and there is a stop in Halifax, Nova Scotia, where the unclaimed victims of the disaster were buried.

It seems like Titanic-tourism has become big business after the mega-hit movie came out over ten years ago. This particular tour seems fairly educational; there’s no meals modeled after the meals served on the original ship or encouragement to buy period costume.  But is it still too much? Are Titanic-themed cruises or ships just asking for trouble or is anyone who hesitates to step aboard simply too superstitious?