The "black knight" in orbit

The "black knight" in orbit 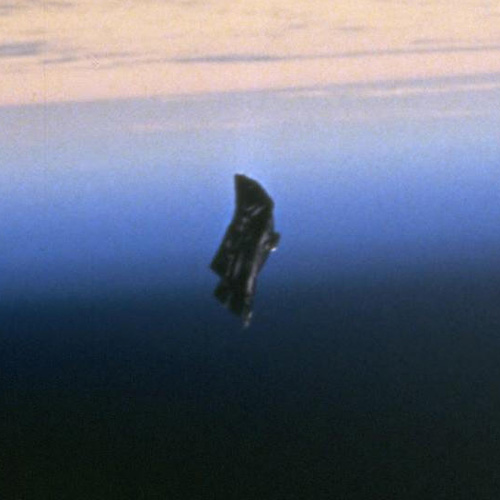 Real or hoax? A little of both.
Lately, stories about the "black knight satellite" have been circulating again. I have to admit that, while I usually find this kind of thing frustrating and annoying, I find the myth of the black knight to be somehow charming.
As the legend goes, a large black object has been in orbit around the Earth for thousands of years. From the side, it resembles a knight sitting on a throne. This 13,000 year old satellite is a complete mystery, one which manages to get wrapped up with Nikola Tesla, NASA, astronaut Gordon Cooper, and aliens.
The legend of the black knight is actually a pastiche of misunderstandings, misinformation, and wishful thinking. The famous picture of the black knight is real, unaltered, and actually belongs to NASA. However, the photo actually depicts the remains of some thermal blanket debris as photographed from the space shuttle Endeavor. Your typical chunk of space junk, in other words, although it does look suggestively humanoid.
The legend of the black knight holds that Nikola Tesla picked up a repeating radio signal in 1899 which somehow became ascribed to the black knight itself. Tesla did indeed pick up anomalous radio signals, and he was correct in his belief that they came from outer space. We now know that these signals came from distant pulsars: rotating neutron stars which throw out pulses of electromagnetic radiation.
The other aspects of the black knight's tale are a hodgepodge of anecdotes about random chunks of debris floating above the planet. There is a lot of junk in Earth's upper atmosphere, and more every day.
However, as nice (or as sinister) as it might be to think that a mysterious satellite could orbit the Earth for 13,000 years keeping watch over us, it defies the laws of physics. Without a system of propulsion, any object's orbit will eventually decay, and the object will fall into the Earth's atmosphere to either burn up on entry or fall to the ground as a meteorite. (Barring something like the large-scale system of tension between gravity and speed which keeps the moon in Earth's orbit, of course.)
As for the claims that Gordon Cooper spotted a mysterious glowing green light in the vicinity of the black knight during his flight in Mercury 9, Gordon Cooper vehemently disputed this claim himself. Although Cooper did claim to have seen UFOs in the past, he was always willing to provide transcripts of the Mercury 9 flight which demonstrated that he did not see any glowing green lights in space.
< Previous post:


What happened to Malaysia Airlines Flight 370?


Was Stonehenge designed as a giant xylophone?