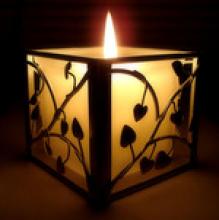 When I was a kid, I had this incredibly morbid book about spontaneous human combustion.  It was written in as lurid a fashion as possible, had a collection of glossy photos in a central inset, and put forth the most preposterous theories with great enthusiasm.  I'm pretty sure I bought it out of the nickel box at someone's garage sale.

(Sometimes I wonder what my parents were thinking, letting an eight year old girl read a book about spontaneous human combustion.  Maybe they didn't notice, or maybe they were just happy that I read books at all.  Certainly I doubt they realized that I was both compelled to read it, and suffering from nightmares where I woke up with half my body burnt and reduced to ash.)

I remember that this book collated a lot of really bizarre and random facts, and tried to collect them as a theory.  For example, each of the victims - so the author claimed - were "angry people."  Some of them were just chronically cranky, and others had recently had some kind of big argument with someone in their life.  Like a wife who fought with her husband, then the husband came back the next day and found her charred remains.

Much was always made of the fact that everything else in the room was untouched by fire or flame, and yet the human bodies had been reduced to ash.  It takes so many thousand degrees to reduce bone to ash, we are told.  How otherworldly it was to examine those pictures of a body-shaped pile of ash in an otherwise untouched recliner, beside a shelf full of undamaged photographs!

Of course, the first thing we can question is the use of the word "spontaneous" in the term "spontaneous human combustion."  A surprising proportion of SHC victims were cigarette smokers.  Many of them had been drinking.  It's not undue to assume that they might have fallen asleep or passed out with a lit cigarette in hand.  In which case, the combustion is hardly spontaneous.

The boring, pedantic, scientific, and probably correct explanation is that the victims died suddenly of a stroke or heart attack while smoking a cigarette.  (Certainly cigarette smoking drastically increases your odds of dying this way.)  The cigarette drops onto the clothes, which begin to smolder.  And then the "wick effect" takes over.

When you burn a candle, you aren't really burning the wick per se.  The wick is a string of cotton which sucks up oil or wax from the candle and feeds it to the fire.  What you see is the candle's wax burning, while the string itself remains fairly unaffected.

The fat of a human body can also slowly be rendered into a flame, with the clothing acting like a wick.  The dead body essentially becomes one big candle, which gradually burns the victim's tissue and bones down to char.  Thus, although Spontaneous Human Combustion is often imagined to take place in one great "WHOOMPF!" of flame, the truth is that it is a long, slow, low-temperature burn.