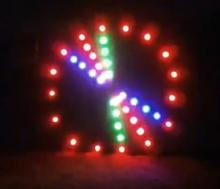 On Sunday, February 20, 2011 a number of residents in Vancouver, WA sighted what they described as a "flying saucer." Several people phoned 911 and were directed to the National UFO Reporting Center in Seattle, but so far no official reports have been filed.

The object was described as being extremely bright - bright enough to draw neighbors out of their houses to see what was causing it. It was also described as hovering soundlessly in the air, between 7 and 8PM.

What was hovering over SW 192nd Street in the Clear Meadows neighborhood last Sunday night? It did not appear on airport radar, according to the FAA. It hovered roughly in one spot, although it made "occasional side-to-side movements."

Frankly, having seen the video, I suspected that it was an RC helicopter with a string of attached LED lights on the "Party" setting. One eyewitness even said of the saucer-shaped object that "it was almost like someone was controlling it from the ground." The lights flashing on the object are dead ringers for the strips of lightweight LED lights which can be programmed to flash in pattern.

Combing through the comments on the article in The Columbian, I noticed an interesting comment from someone who claimed to know the object's identity. "A relative saw it from Fishers Landing, drove around and found the source, it was someone flying a kite with LEDs on it in a park in Fishers Landing."

Another commenter said that "it was a kite in Clearmeadows park… We watched it from our window during dinner."

Of course, comments on online newspaper articles are the third-lowest form of discourse available on the internet today. (In case you were wondering, YouTube comments are the second-lowest, and 4chan is the #1 lowest.) And these unverified assertions are coming from an essentially anonymous account, so who knows what the provenance is, there.

Nevertheless, they do have the ring of truth. And certainly a kite decorated with a string of LEDs makes more sense than other theories which have been floated, including a mis-sighting of the planet Jupiter (not from the video it isn't), and military helicopters. (Why a military helicopter would hover over a Vancouver neighborhood for the better part of an hour is an exercise left to the reader.)

The kite explanation also addresses the most unusual aspect of this sighting, which is its silence, combined with its low height. It seems clear to me from the video that this is a smallish object hovering somewhere around treetop level.

A Google search for "LED Kite" shows that these are a real thing, which you can buy online. You can either buy a fully-equipped kite, or you can buy the LED lights to attach to your own kite. Anyone interested in UFO phenomena should definitely acquaint themselves with these, because we're sure to be seeing a lot more kite/UFO reports in the years to come!

(And potential pranksters, be aware that people have been arrested for flying LED kites and scaring the crap out of the townsfolk.)